'W.' and the Bush Legacy 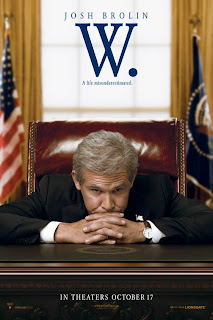 I was understandably skeptical when I first heard of Oliver Stone’s plans to make a George W. Bush biopic while the man was still in office, at first relieved that Stone had seemingly returned to making incisive movies about controversial political figures after the huge missteps that were World Trade Center (2006) and Alexander (2004), but doubtful that the notoriously left-leaning filmmaker would be able to say anything new and insightful that hasn’t been said elsewhere (however, I should say that I never feel that it’s “too soon” to make a movie about any given subject, and while this may contradict an argument I made on this blog a year ago, I think “too soon” arguments are total crap because they imply some identifiable future date in which a mass of people are collectively, simultaneously prepared to revisit a given subject). But once I saw W.’s inventive advertising campaign, it looked like a dark comedy or satire more in the vein of Dr. Strangelove rather than a continuation of Stone’s dark sagas (marked often by his characteristically overwhelming visual bombast) into the annals of corrupt American history. The film, however, turned out to be neither.

W. is a surprisingly straightforward, unpretentious biopic that operates mostly around a contentious family drama between father and son, and Stone accomplishes here the last thing I ever expected him to—he actually gets into the psyche of a fascinatingly humanized interpretation of George W. Bush.

Having grown up in an area of Texas only twenty minutes away from Bush’s Crawford ranch, I was always under the impression that the cowboy iconography and fake-sounding accent Bush appropriated was more of a means to fool voters into thinking this Ivy League-educated political royalty was an average American simpleton rather than any accurate reflection of his actual life and values. W. argues instead that it is Bush’s presidency that is the façade, and his simple love for the easygoing times of rural Texas culture is where he genuinely feels most at home. Stone and Josh Brolin’s Bush is presented here, unlike Stone’s Nixon, as about as far from evil as one could get. Bush here isn’t depicted as stupid, just in way over his head. The occupational and generational conflict between W. and his father could have been substituted for many other contexts had these characters been fictional and with different last names—Bush here just so happens to have been born into a political family, and with his connections just so happens to become Governor of Texas without having ever held office before, and just so happens to become President of the United States.

Bush’s presidency is depicted as circumstantial and serendipitous—he simply jumped in with the right friends at the right time, but ultimately found himself in one of the last places he’d ever feel comfortable being in. At one point Laura tells him, “One day this war will be over and our lives can go back to normal,” and you can’t help but think that this is exactly what’s going through his mind in the last three months of his miserably long two terms. 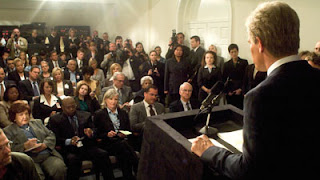 Bush is an undeniably unique personality in an absurd situation. Despite his privileged upbringing, he’s a man of simple tastes and pleasures (in one of the film’s funniest moments, Laura reveals that W.’s favorite play is Cats). The film, once again, doesn’t portray Bush as stupid, just the last person anybody (including his own family) would ever expect to become President of the United States—twice. If Stone wanted to portray Bush as an unforgivable ignoramus, he’d have plenty of material to work with. But here we don’t see Bush continuing to read My Pet Goat several minutes after hearing about the attack on the World Trade Center, nor do we see his entrance into the White House paved by a stolen election, his daily flubs that have been fodder for late-night comedy, or his many embarrassing public moments with foreign leaders. Stone knows how easy it is just to ridicule Bush, and furthermore that the “idiot Bush” is how we already know him best. The filmmaker thankfully instead gives us a protagonist we can actually care about. When Bush stumbles at a press conference, we, for the first time, get inside his head rather than laugh at him from the safety of the seats in front of the podium.

This is not to say, of course, that the film forgives a Bush presidency—it’s simply a character study chronicling how his institutionalization of fear, his politicization of the Supreme Court, his pushing forward of dishonest motives for an unjust war, and his culture of paranoia dividing America in two could have happened. And what’s so refreshing about W. is that it allows us to find humor within what has panned out to be one of the darkest chapters in American history. The humor is hardly ironic or cynical—instead it’s surprisingly rather genuine. Stone allows us to see the absurdity of our given situation, and laugh at how incredibly ludicrous—and how undeniably American—it is that such a man could find his destiny in the seat of the most powerful person in the world. 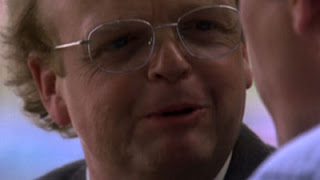 It is the man’s environment that is posited here as what determines his political career, and Bush’s relationship with Karl Rove (played by Toby Jones) takes a straightforward look at these particular circumstances. Bush here is portrayed as authentically “southern” and sincerely religious; it is Rove who sees the character traits already there as political opportunism ripe for his type of propaganda, rather than creating Bush into something he is obviously not (after all, W., as we all know, is not good at faking anything). Bush knows what he wants to say, Rove simply tells him how to say it (even when he’s around his own cabinet). 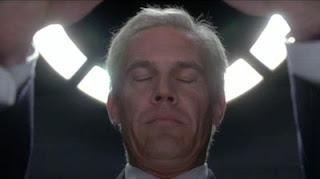 And the connection between neo- conservatism and religion is presented here as tenuous. The neoconservative domestic and foreign policies characteristic of the Bush administration are depicted as result of the collective political ideologies of Condoleeza Rice, Donald Rumsfeld, and Dick Cheney, played by Richard Dreyfuss as exactly how we perceive him to be—an impenetrable mastermind of government bureaucracy and the real power behind the throne. Yet Bush and Rove are the ones who have utilized religion to support these policies—the real government power meanwhile seem turned off by Bush’s insistence on prayer after meetings (after all, we never think of Cheney, the ultimate neo-con, as a fundamental Christian). The connection between religion and politics so seemingly inherent to neo-conservatism are instead presented here as a coalition between the desires of those members of the cabinet with a hunger for power and the (seemingly) genuine but misguided religious spirit of the Commander-in-Chief, in which he believes it’s God’s will that he be President and invade Iraq (W. at one point tells his religious adviser that he doesn’t even want to be President, but he’s heard the calling and must follow, which could explain quite a bit of Bush’s disassociated behavior at press conferences and such). 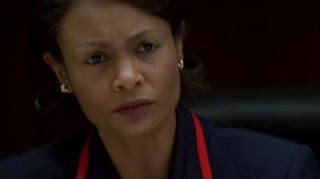 Most of the cast approach their characters within varying degrees of basic imitation and actually attempting a three-dimensional embodiment of the given person. Brolin, Elizabeth Banks, Jeffrey Wright, and Rob Cordry seem to present half-impression, half-character interpretations of the real-life counterparts they portray, with varying degrees of success (as W., Laura Bush, Colin Powell, and Ari Fleischer, respectively—and Powell is thankfully presented as the lone voice of dissent in Cheney’s war room, overcome and compromised by the coalition of the willing working against him). Meanwhile, James Cromwell, Ellen Burstyn, Scott Glenn, and Ioan Gruffudd seem to be making no attempt whatsoever to physically resemble George H.W. Bush, Barbara Bush, Donald Rumsfeld, and Tony Blair respectively, choosing instead to approach the roles as characters on their own, once again with varying levels of success (you really have to stretch your imagination for Glenn and Gruffudd). However, Thandie Newton’s shockingly spot-on portrayal of Condoleeza Rice seems to suggest a different film entirely, one that could have been completely embedded in biting satire, one with a serious actors articulating perfect impersonations of the many eccentric quirks of those mysterious figures running this country, without approaching the psychology of several of these truly impenetrable figures.

The film feels as hurriedly jumbled together as was, transposing some of the more famous Bushisms into different contexts in an economy of effort and a condensation of time. It is not, by any means, one of Stone’s more carefully envisioned works, nor does it seem to achieve any convincing cohesion regarding the events portrayed with how they panned out in reality. But Brolin’s W. is Brolin’s W., and his face is not so much substituted for the President’s as it is used as a vessel for a character study all its own, thereby forming a jumping-off point with which to attempt approaching the man himself and his confounding place within our nation's history. 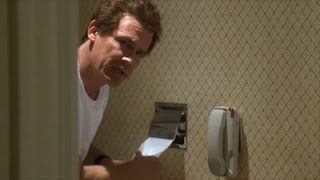 I never voted for George W. Bush, and since I started giving a damn about politics around 2003 (I turned eighteen right when we started bombing Baghdad), he’s come to represent the opposite of everything I stand for politically, ideologically, and even spiritually. Yet, three months before he’s left office, I find myself at Union Square on opening night paying $25 for two tickets to see a biopic about him. Even knowing that it’s a film made by a notoriously leftist filmmaker, why should I have cared to spend the money if I despise the man so much? Because W., flaws and all, is without denial a figure of continuing fascination—I believe, left or right, most of the nation feels this way. Even when we’ve got him pegged, even when we can’t fathom him making one more gaffe, he continues to surprise us.

Whether I like it or not, W. the real-life President has defined a very significant part of my life. He took office in an election that brought to light the futility of the electoral process when I was a sophomore in high school, was reelected my sophomore year in college, and will leave office around the time I’ve finished grad school, with his face being inseparable from the destruction of almost every major governmental system that the function of our nation depends on. It’s tough to say quite yet what Bush’s legacy will be like, but I (with a straight face) doubt he’ll go down as one of the most hated men in American history. I think his legacy will be more akin to how he is portrayed in W.: the wrong man in the wrong place at the wrong time, and all the absurdity therein.

Honestly, I’m going to miss Bush when he leaves because, while we do live in undeniably harsh times attributed largely to him, he was such a singularly unique, appallingly odd President during an equally strange political era. I do not doubt his legacy will continue to be reinterpreted long after he leaves office, and W. may not prove to be the definitive work of art preserving the President’s unprecedented place in history, but I think it’s a good place to start. 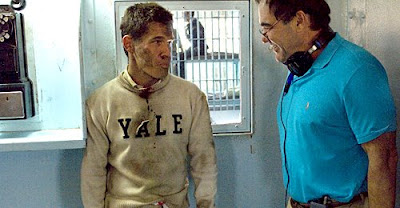 Josh Brolin did a convincing Dubya, though it reminded me a lot of his cowboy character from No Country for Old Men... over all, i don't doubt that 'W.' will have the effect Oliver Stone desired